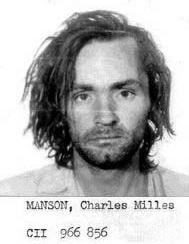 Claim to Infamy: In the summer of 1969, Manson orchestrated a series of horrific murders intended to bring about “Helter Skelter” – Charlie’s version of the end of the world.

Indiana Connection: While living in an Indianapolis boarding house, fourteen-year-old Charlie was arrested for car theft and was sentenced to Indiana School for Boys.

Current Status: Serving a life sentence with the possibility of parole in Corcoran State Prison in California

Random Disturbing Fact: Manson was sent to his first day of school dressed as a girl because his uncle thought the ridicule it would prompt from other children would force Charlie to become more aggressive.